In 2016, 121,000 people in the Netherlands sought emergency care for sports injuries. Every year, there are 4.5 million injuries in the Netherlands, accounting for 5 million euros in direct medical costs. Half of these injuries could potentially be prevented through effective support and self-management. In a new, wide-ranging research project, universities, businesses and sports organisations are set to join forces in an effort to reduce this large number of sports injuries with the help of technology. The Netherlands Organisation for Scientific Research (NWO) is providing a grant of 4 million euros to support the project. In addition, businesses and sports organisations are jointly investing 2.2 million euros in the project. Delft University of Technology and VU University Amsterdam will take the lead in this nationwide research consortium that aims to make injury-free exercise possible for everyone. 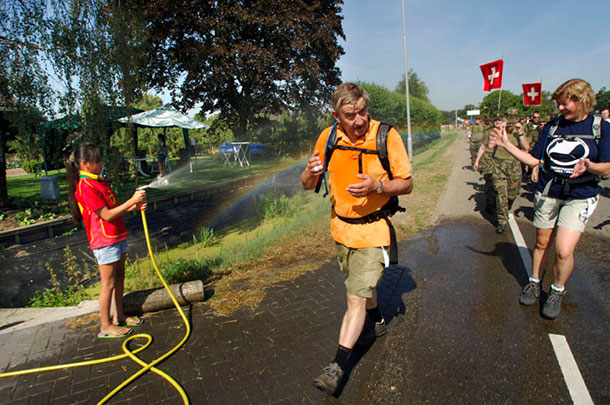 Running causes the body temperature to rise. In the Zevenheuvelenloop (Seven Hills Run), held last weekend in the Dutch city of Nijmegen, 15% of runners had a body temperature above 40° Celsius by the time they reach the finishing line. In order to identify potentially dangerous situations at an early stage, sensors can be embedded into clothing to measure skin and core temperature and camera systems can be used during running competitions. During exertion in hot conditions, like at the upcoming Olympic Games in Tokyo, preventive measures could be used to regulate body temperature, such as a vest that cools the body based on information from these sensors.

This is one of the concrete future applications featured in the extensive research proposal Citius Altius Sanius (Faster, Higher, Healthier) that was recently awarded a grant worth 4 million euros by NWO Applied and Engineering Sciences. The proposal aims to promote participation in sport, prevent injuries and improve performance in both amateur and top-level sport. This can be achieved by providing the athlete with information via sensors, data science technology and psychology-inspired smart feedback devices in order to influence their behaviour. Examples could include a 24/7 monitoring system that provides runners with information on the optimum levels of training difficulty and the best time to train in the day or week in order to prevent injury.

The research is being conducted by an alliance of eight universities and university medical centers and six universities of applied sciences who will collaborate on the project with NOC*NSF (Dutch Olympic Committee/Dutch Sports Federation), more than 20 businesses (including Royal Dutch Gazelle, adidas and insurance company Zilveren Kruis), several sports associations, including those representing football (KNVB), hockey (KNHB), Baseball (KNBSB) and tennis (KNLTB), sports teams (including Team Sunweb), sports physicians and sports physiotherapy practices.

Citius, Altius, Sanius is based on three fundamental lines of research. The first of these is sensor technology. Innovative and easy-to-wear sensors (integrated into sportswear) and advanced cameras with real-time imaging will assess the mechanical and physiological strain on the athlete. For football and hockey, there will be a special focus on hamstring injuries, which often result from overexertion. In cooperation with the KNVB, special clothing will be developed fitted with sensors that can accurately record football or hockey players’ movements. This will not inhibit performance and can easily be worn during training and matches.

The two other lines of research, alongside the use of sensors, are data processing and feedback. Programme leader Prof. Frans van der Helm (director of the TU Delft Sports Engineering Institute): ‘The information provided will be tailored to the individual athlete. This can be achieved by taking account of his or her specific characteristics and providing effective and personalised feedback. Data science will be used to forge a link between levels of exertion and potential injuries and to provide individual advice on training.’

In addition to the three fundamental lines of research, there will be six specific projects that focus on sports in which injuries are particularly common. The sensors for use in football and hockey, the overheating research and the 24/7 monitoring of runners are examples of these projects. But there will also be a focus on cycle safety, aimed both at elderly people who cycle relatively slowly and professional cyclists who negotiate steep descents at high speed. Solutions will be developed in the coming years to maintain bicycle stability at very low speeds, enabling older people to get on and off easily. Professional cyclists will receive feedback information for safer downhill cycling.

With 3.1 million practitioners in the Netherlands, fitness and power training is another highly relevant subject for this research. Since most fitness equipment is in a fixed position, it is relatively easy to mount power sensors and cameras to record movement. In combination with physical information (heart rate, etc.) and even an assessment of facial features (gauging the level of exertion), tailored advice can be provided. Finally, in coordination sports, such as tennis and baseball, the focus will be on elbow and shoulder injuries. A wearable sleeve and power meter built into the racket can together provide information on exertion and movement. Again, feedback can be provided to improve movement in order to help prevent injuries.

Every year, the NWO Applied and Engineering Sciences domain makes a research budget available to develop and fund new, challenging research programmes within the applied and engineering sciences. In this round of funding, 21 million euros is available for programmes that fit within the Dutch government’s nine designated top sectors. The programmes are partly funded by private parties. In the next five to six years, the total budget will fund 74 doctoral candidates and 25 post-docs.

We use cookies to ensure that we give you the best experience on our website. If you continue to use this site we will assume that you are happy with it.Ok